MMA fighters use a mixture of martial arts and the way that they win fights reflects their personal style.

A useful way of understanding the styles of fighters is if we (1) determine the styles of individual fighters and, (2) understand the set of techniques that an individual style entails. To investigate the latter question, rather than assuming that the grouping of techniques was known (such as heel hooks and triangle chokes contributing to a BJJ game), I determined whether such groupings could naturally emerge based on how frequently finishes have been used by the same fighters (i.e. do fighters who win with armbars tend to win with triangle chokes?)

Using data from ~120,000 wins across 35,000 fighters, I determined how frequently each pair of 50 common finishes was used by the same fighters relative to chance, allowing me to identify ~300 pairs of finishes that are commonly used together by fighters. These finish pairs can be used to more broadly organize finishes, grouping finishes that share similar partners.

I only used fighters who had multiple finishes so that I could determine how those shared finishes were related. I filtered fighters with less than two finishes as well as fights where the finishes are not well recorded. The only information required for this analysis was a list of fighters and a summation of how they won all of their fights.

Shown in the table “overall_results,” there are 37843 fighters who have won fights using a total of 50 distinctive finishes. There are total of 188566 wins represented.

To identify finishes that cooccur frequently, I will first show how to determine how many times each pair of finishes (such as armbars and punches) has been used by a single fighter. I will then expand the results from a single fighter to cover all fighters. This will reveal how many times pairs of finishes have been used together by the same fighters. Because some finishes occur more frequently (such as armbars and rear-naked chokes) than others (such as gogoplatas and flying knees), this observed frequency of cooccurrence must be compared to an expectation if all finishes were used randomly. This relative shared finish frequency (RSFF) will ultimately tell us how pairs of finishes are linked and significance testing will tell us whether this enrichment is to be expected.

Looking at a single fighter

To determine how many times each pair of finishes has been used across all fighters, I will first consider a single hypothetical fighter. Let’s assume that this fighter has won 6 fights: 3 by armbar, 2 by punches and 1 by a rear-naked choke (RNC). A nuance here is that the fighter has won by armbar and punches multiple times. For this fighter, multiple armbars cooccur more often than multiple RNCs and armbars cooccur with punches more frequently than with RNCs. In order to appropriately analyze this dataset, our notion of finish cooccurrence must reflect this clear intuition.

For the three unique submissions above, all pairs of edges are:

Looking across all fighters

A shortcut to this calculation can be found using matrix multiplication, treating diagonal and off-diagonal elements separately.

\(\mathbf{E}\) is symmetric across the diagonal due to duplication of entries (i.e. counts of armbar-triangle = triangle-armbar). To avoid this double counting of some entries, I only consider the upper triangular matrix of \(\mathbf{E}\) This is done by setting all elements below the diagonal to zero.

One interesting facet of this analysis is that I am not only interested in single pairs of finishes that are likely to cooccur, but also expect that sets of finishes (such as all leg locks or different types of kicks) may cooccur as a group. In the 50 x 50 summary of RSFF, this group structure would manifest as block diagonal structure if the finishes were appropriately ordered. To determine this ordering of finishes, I used hierarchical clustering and then visualized the resulting reordered matrix with a heatmap. 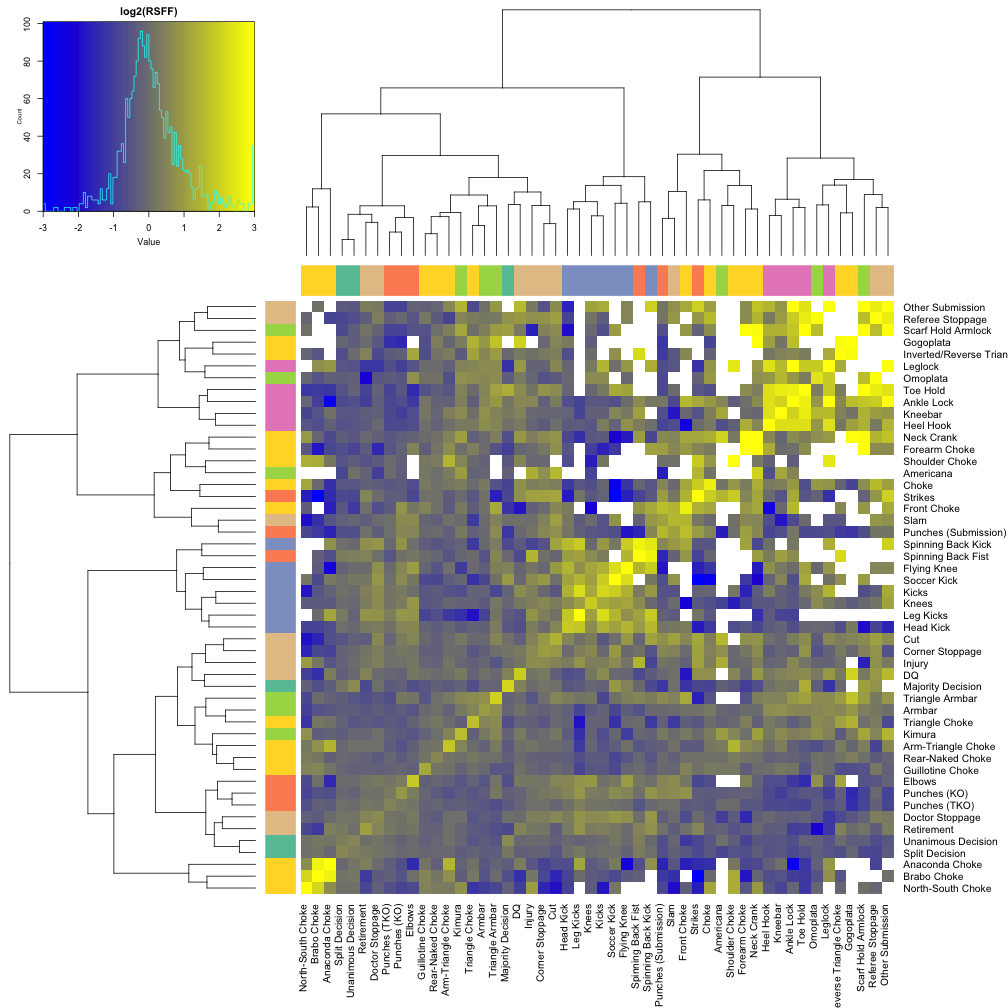 While there are clear groups that emerge as block-diagonal sets in the heatmap, it is less clear whether some of the other (primarily off-diagonal) linkages between finishes are real or whether they are only weak, chance associations. To determine which finishes reliably cooccur, I had to do some statistics.

To determine if a pair of finishes cooccurs more (or less) frequently than expected, I needed to determine whether RSFF values like 1.5 are extreme or to be expected. A challenge with this is that an RSFF of 1.5 is likely less meaningful if the finishes are rare. If two finishes are rare, sometimes even a single instance of a fighter using two finishes yields a large RSFF. Thus, I needed to assess whether the value of RSFF for each finish-pair is extreme in light of the frequencies of these finishes. To do this, I used permutation analysis.

Permutation analysis is a powerful approach for investigating questions that use test-statistics with uncharacterized properties or with complicated dependencies that must be preserved. Using permutation analysis, we can break the dependence between pairs of finishes, which leads to elevated (or decreased) RSFF, while maintaining the overall frequency of individual finishes. Essentially, I will shuffle the finish records of all fighters while maintaining each fighter’s number of wins and the overall number of each finish across all fighters, and then calculate a null value of RSFF for each pair of finishes. This gives me one summary of RSFF values that could be expected if there were no dependent signals in the dataset. Generating many of these null datasets and values of RSFF provides a full null distribution of RSFF values for each finish pair. I then compared observed values of RSFF to the null distribution of RSFF to generate p-values. Because I carried out many comparisons I used a qvalue-based false discovery rate correction to determine which pairs of finishes were significant at an FDR of 0.05 (i.e. we expect that one out of twenty predictions is erroneous).

A graphical network of MMA finishes

Now that I have determined which pairs of finishes fighters use together significantly more than expected, I can use this structure to better understand different styles of MMA fighters. I can take advantage of several pieces of information to do this:

Across the 50 finishes, there are 289 pairs of finishes that significantly cooccur, among these, some associations are strong (high RSFF and low p/q-value) and others are weak. To visualize these cooccurrences, I used an undirected graphical network to organize finishes based on their cooccurrence effectively translating highly significant values of RSFF into closer proximity of finishes in a layout. To create this layout, I used the strongest connections in the network to guide the layout (so that some finishes that are weakly connected to many other finishes wouldn’t dominate the layout), and I used a spring-based, force-directed algorithm (Kamada-Kawai) to find an optimal layout. 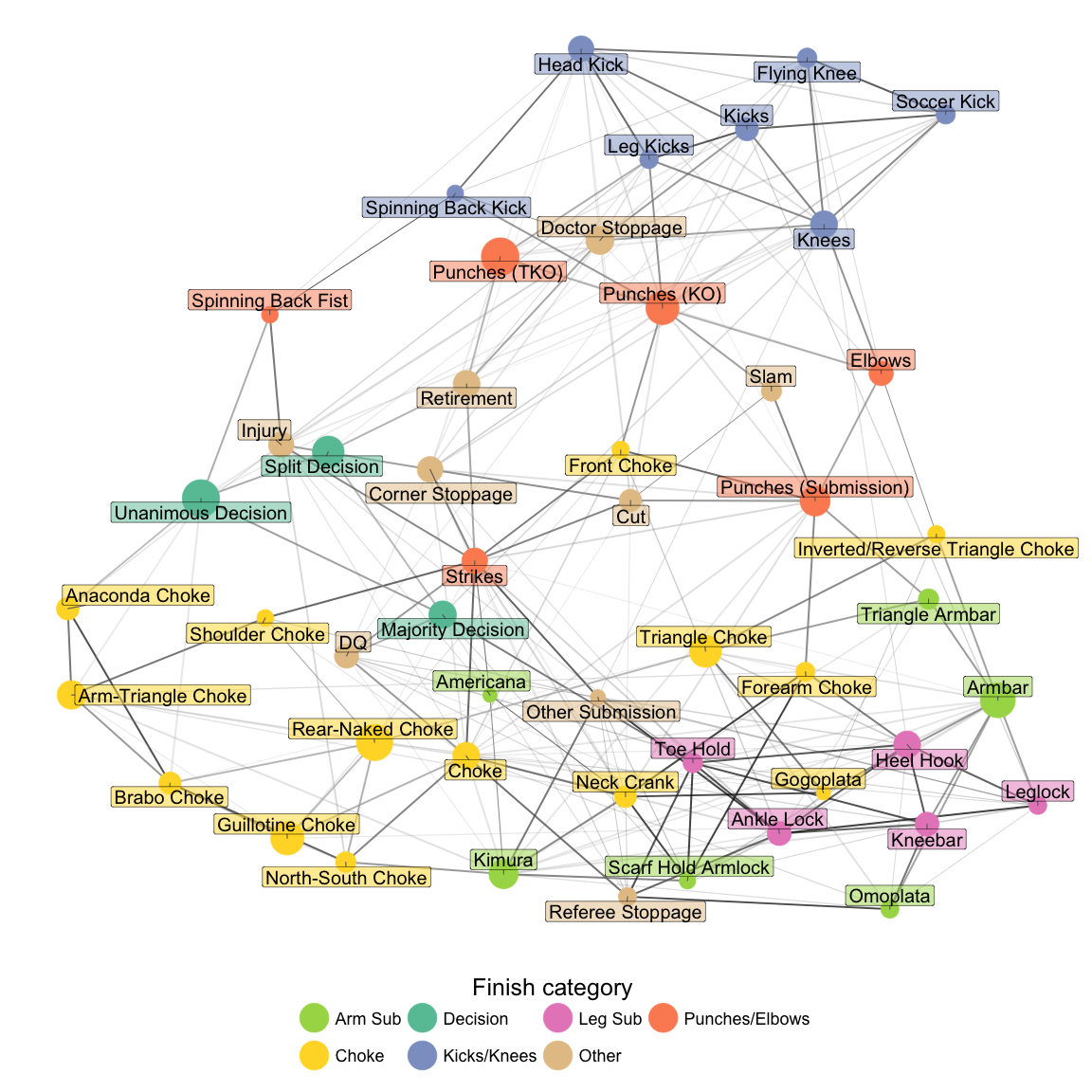 The heatmap analysis identified a few subsets of finishes used by fighters, but when viewed as a network of significantly cooccurring pairs of finishes, it is clear that relationships between finishes are far more nuanced. Finishes don’t resolve into isolated clusters; instead, they form a continuous network, with each finish coupled to stylistically similar finishes.

This finish network is almost linear, with some weak connections between each end of the line, such that the graph is bent into a “U.” The finishes at each end of the “U” are (1) kicks, elbows and knees, and (2) leg submissions and submissions from guard. Winning a TKO or KO by punches is associated with the kickboxing finishes, as would be expected; however, striking is also strongly associated with winning by decision, underscoring the importance of striking in winning by decision. In the bend of the “U” are chokes that require strong positional control: Arm-Triangle, Rear-Naked Choke, Anaconda, Darce and the North-South Choke. These chokes are also connected to winning by decision

I think this analysis is a good start to quantitatively defining MMA styles; but, I would also like to define the styles of fighters themselves. Because the vast majority of fighters have had a small number of fights, it would be easy to over-focus on finishes that a fighter has previously utilized. In my next post on MMA styles, I will discuss how such over-fitting can be avoided by balancing fighter-specific data with patterns across fighters using empirical Bayes.