Building a large database of MMA fight results IV: turning tables into a database with R and SQL


Previously, I discussed acquiring and standardizing a compendium of fighter and fight-level MMA results.

In this post, I will go over how the previously created fight, fighter and event-level tables can be transformed into a MySQL database that can both be created and accessed using R.

Before we can make an MMA database we may have to setup SQL.

First we need to install a distribution of MySQL. For this purpose, I would recommend MySQLWorkbench. In addition to including a distribution of MySQL that can be accessed from the command line, MySQL Workbench also has a nice, interactive interface for making SQL queries and contains other features, such as tools to make an Enhanced Entity-Relationship (EER) diagram.

Before we can actually start querying SQL, we need to start the local server. For OS X, I do this using the MySQL Preference Pane, which allows you to start the server from Systems Preferences.

Another step that may be useful is creating an alias for MySQL so that it can be more easily worked with. I did this by adding the following code to my .bash_profile.

Once the initial setup of MySQL is complete, the next step is to create the database that we will populate with our fight data.

Now that we have piped the bouts, fighters and events into the MMA database we can start working with this dataset in SQL.

MySQL Workbench makes interacting with SQL queries very straightforward. For example, shown below, we can see all the results of bouts that ended in headbutts.

To better understand this dataset, it would be useful to know how fields in each dataset are connected. Generally, each table will have a primary key that uniquely identifies each entry (a row). For fighters and events, a logical choice for the table’s primary key are the urls that pointed to the fighter and event’s webpage (Query and Event_link, respectively). Individual bouts entries were derived from fighters’ pages, so the table doesn’t have any great choices for a primary key. To generate a unique primary key for bouts, we can add an additional field Fight_ID that provides a unique identifier to each bout entry. We can also auto-incriment this ID such that if additional fights are added, they will automatically be provided a new unique ID.

Primary keys are useful because they can be used to perform summaries at the fighter/bout/event level. An even more important role for these keys is that they tell us how to combine data. For example, we have both fighter-level data and bout-level data: if we want to be able to combine these two datasets, we need a clear way of linking fighter-level data to the fighter and his/her opponent in the bouts dataset. We can accurately carry out this combination because the bouts data contains two columns, Fighter_link and Opponent_link, that serve as foreign keys; their entries map to the entries of Query in the fighters table. A similar link is provided by the Event_link in the bouts data; it maps bouts to a specific MMA event stored in the events table.

An EER diagram for this dataset summarizes the fields in fighters, bouts and events as well as the primary key, foreign key relationships that link them: 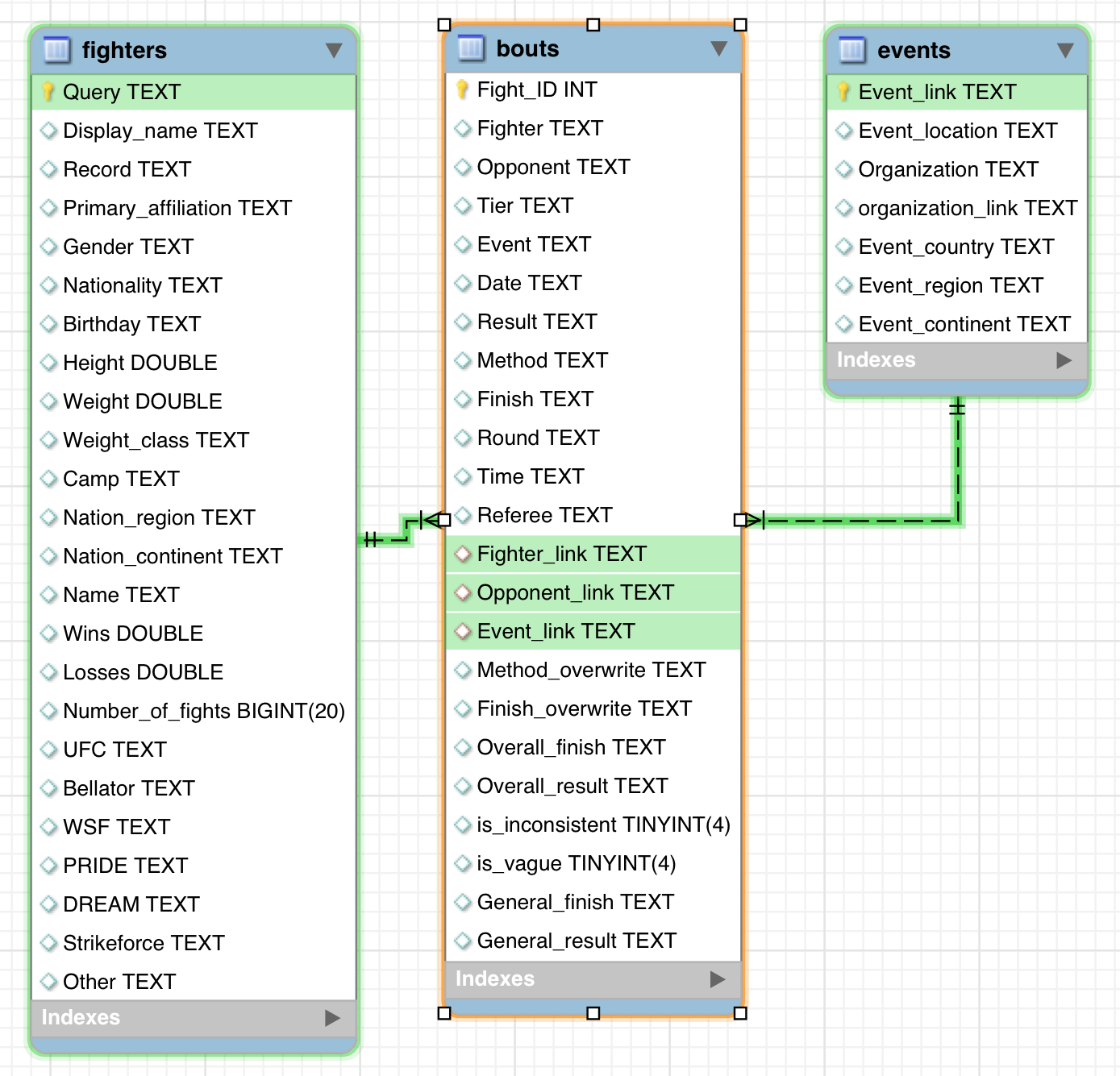 While SQL is a powerful language for querying and combining tables, if we want to analyze our database using R, it is useful to access data from within R.

An alternative to making queries using SQL syntax is to use dplyr to set up similar select, filter, etc. commands and then fetch the data that we are interested in.

Now that we can cleanly combine and access fighter and fight-level data, we can dive into some deeper analyses. I have already talked about one such analysis: treating bouts as an undirected graph to investigate the factors affecting fighter matchups.